After the 2nd Annual Conference of the 3 Fora and the 4th EUSAIR Forum had been held in Budva, from 6 to 8 of May, the Budva Declaration has been adopted on the 8th of May 2019 by the high-level political representatives of the AII/EUSAIR participating countries at the Adriatic Ionian Council / EUSAIR Ministerial meeting.

The 3 Fora, representing the civil society, have been recognized as important stakeholders of the EUSAIR Strategy. During the official opening of the IV EUSAIR Forum, in which also Forum AIC President took her greetings and speech, the importance of the 3 Fora contribute (FAIC, UNIADRION and FORUM AIC) to the strategy and to the values of EU has been underlined by Mr. Markovic, prime Minister of Montenegro.

In this wider context, Forum AIC Governing Board and General Assembly meetings took place, with the election of the new President: Mr. Gino Sabatini, President of Marche Chamber of Commerce, has been unanimously elected by the Assembly. After 2 years of Croatian Presidency, held by Mrs. Mirjana Cagalj, President of Split Chamber of Commerce, the leadership comes back to Italy. 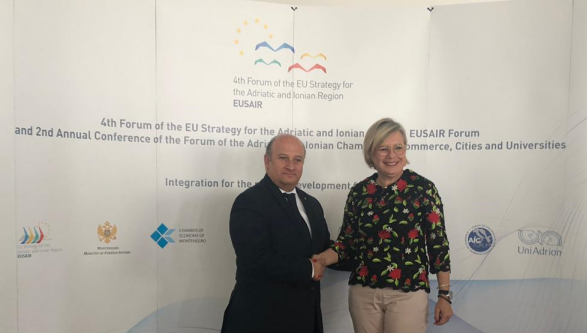 Forum AIC Governing Board has also a new Vice President: Mr. Marko ŠantiĆ of the Chamber of the Federation of Bosnia and Herzegovina, until the meeting of the extraordinary Assembly of the Forum to be held in Arta next autumn. Arta was indeed chosen for hosting the 11th Congress of women entrepreneurship in the Adriatic and Ionian Area. On that occasion, an amendment to the Statute, already discussed in the meeting held on 8 May, will be brought to the approval of the Assembly, with the inclusion of two additional vice presidents, as well as the alternation of Presidency and Vice-Presidency founding Chambers of the Forum: the Split Chamber of Economy and the Marche Chamber of Commerce.

On the date of 7th and 8th May, moreover, the Workgroups on Societal Challenges, Economic and Policy Analysis, Women Entrepreneurship took place. The Workgroups, structured on the basis of the EUSAIR Pillars, were held in the framework of the AI-NURECC project. “Development of Adriatic Ionian area through cooperation – opportunities and challenges” was the title of the first Workgroup, moderated by Phd. Marko ŠantiĆ, President of Chamber of Economy of the Federation of Bosnia and Herzegovina.

“DIGITALIZATION – a tool for the development of society and economy”and “Innovative women in creative industries of the Adriatic and Ionian Region” were the main topics of the respective Workgroups on Economic and Policy Analysis and Women Entrepreneurship. The first one was moderated and introduced by Giuseppe Ieraci, PhD Political Science DiSPeS – University of Trieste, while the second saw as moderator Antonija Bašić, from the Chamber of Economy of Croatia, Split. Forum AIC Workgroups took place togheter with the EUSAIR Pillars Sessions, in which some of our speakers have been involved.

A last mention goes to the EU-project Workgroup, which saw the intervention of Lodovico Gherardi, Coordinator of the managing Authority Unit of Interreg ADRION Programme: during his speech, he underlined as the Facility Point, held by Regione Marche, and the AI-NURECC project are examples of good practices for the implementation of the EUSAIR strategy.

All the useful materials and speakers’presentation, togheter with a more detailed report of the event, will be published soon.