The 4th EUSAIR Forum jointly organized by Montenegro and the European Commission and with the support of the strategic project EUSAIR Facility Point took place in Budva, Montenegro on 7 – 8 May 2019. Montenegro organised the 4th EUSAIR Forum in coordination with the 2nd Forum of the Adriatic and Ionian Chambers of Commerce, Cities and Universities. The two events represented joint effort of the Ministry of Foreign Affairs, European Integration Office and Chamber of Commerce.

The event was a great and unique opportunity for promotion of deeper and wider cooperation between EUSAIR-EU member states and candidate/potential candidate countries participating in the EUSAIR with special focus on the fields of Blue Growth and Tourism.

The opening speech was held by Mr. Dusko Markovic. The Prime Minister of Montenegro underlined the importance of the Strategy EUSAIR for the exchange of best practices and for strengthening EU mechanisms. The strategy is an added value for cross-border international cooperation and the Macroregion reflects all the European values: the Adriatic Ionian area is an important natural and economic resource, it is the home of more than 70 million inhabitants who share resources and potential, despite different economic indices. In these territories, the Prime Minister noted, it is important to invest in research sectors, through Cities, Universities and Chambers of Commerce.

It was then the turn for the representatives of the Fora to give their greetings, as well as for the president of the Chamber of Commerce of Montenegro. The latter underlined how the Adriatic Ionian area promotes mobility and this leads to the development of greater integration. Since 2000 the AIC Forum has been working on the development of the area and in this sense new investments are fundamental.

“It is extremely important to involve all stakeholders in order to realize the EUSAIR Strategy and the Action Plan as efficiently as possible”. Thus began the speech by the President of the Forum, Mrs. Cagalj. 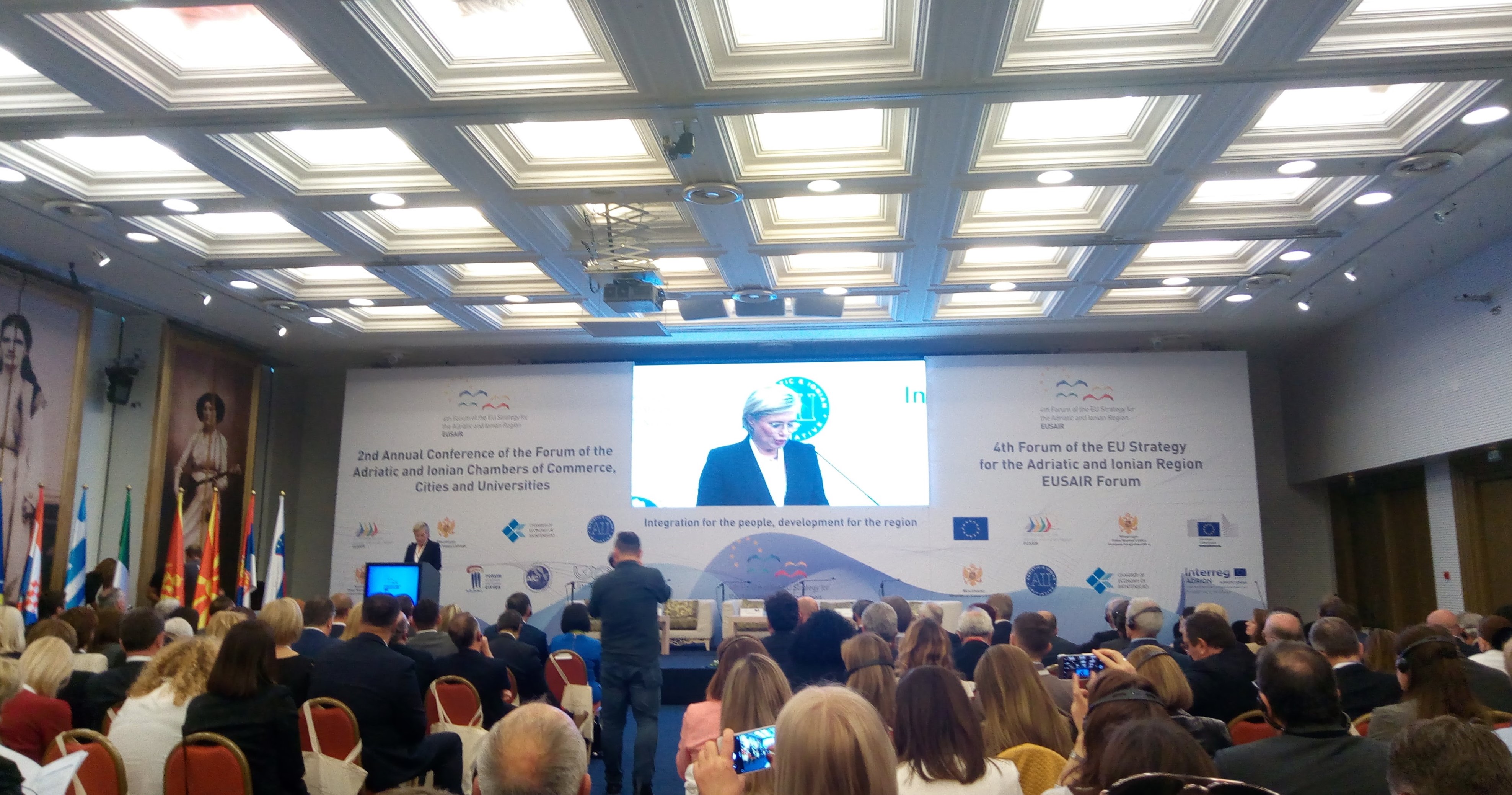 “The focus and aspects of our actions differ, but we all have one goal, and that is the wellbeing of the Adriatic and Ionian region, what the motto of this year’s conference proves. Our focus has been on the economic development and prosperity of the whole area since 2001, when the Chamber of Commerce of Ancona and the Croatian Chamber of Economy Split County Chamber established our association, a unique network in the economic world of the Adriatic and Ionian area”, Mrs. Mirjana Cagalj said.

“Over the years, we have defined topics of common interest and within our workgroups we worked on identifying and solving current challenges. We were very pleased when the European Union brought the EUSAIR, and the pillars of the Strategy were in line with the four topics we have discussed over the years at the meetings of our workgroups”. Forum AIC President also emphasized the Workgroup on Women Entrepreneurship, which has been from the very beginning doing its best to equalize different positions and starting points of women in the world of entrepreneurship in the Adriatic and Ionian area. “We have witnessed positive shifts and best practice examples. We are very proud of everything that has been done so far and with the same enthusiasm, we continue. We are a project-oriented network and in the last two years, we have been focusing on the concretization of long-term partnerships through projects of common interest financed by EU funds. So we have applied a series of projects on cross-border and transnational cooperation programs, and in this direction we will continue in the future”.

The President underlined as the support of the European Commission has been very important, thanks to which the project AI-NURECC is being implemented. Also in this event, there were activities and initiatives organized within the AI-NURECC project. In particular, three Workgroups were organized in the framework of the project and structured on the basis of the EUSAIR Pillars: Societal Challenges, Economic Analysis and – of course – Women Entrepreneurship. “Development of Adriatic Ionian area through cooperation – opportunities and challenges” was the title of the first Workgroup, moderated by Phd. Marko ŠantiĆ, President of Chamber of Economy of the Federation of Bosnia and Herzegovina. “Digitalization – a tool for the development of society and economy”and “Innovative women in creative industries of the Adriatic and Ionian Region” were the main topics of the respective Workgroups on Economic and Policy Analysis and Women Entrepreneurship. The first one was moderated and introduced by Giuseppe Ieraci, PhD Political Science DiSPeS – University of Trieste, while the second saw as moderator Antonija Bašić, from the Chamber of Economy of Croatia, Split. Forum AIC Workgroups took place togheter with the EUSAIR Pillars Sessions, in which some of our speakers have been involved. 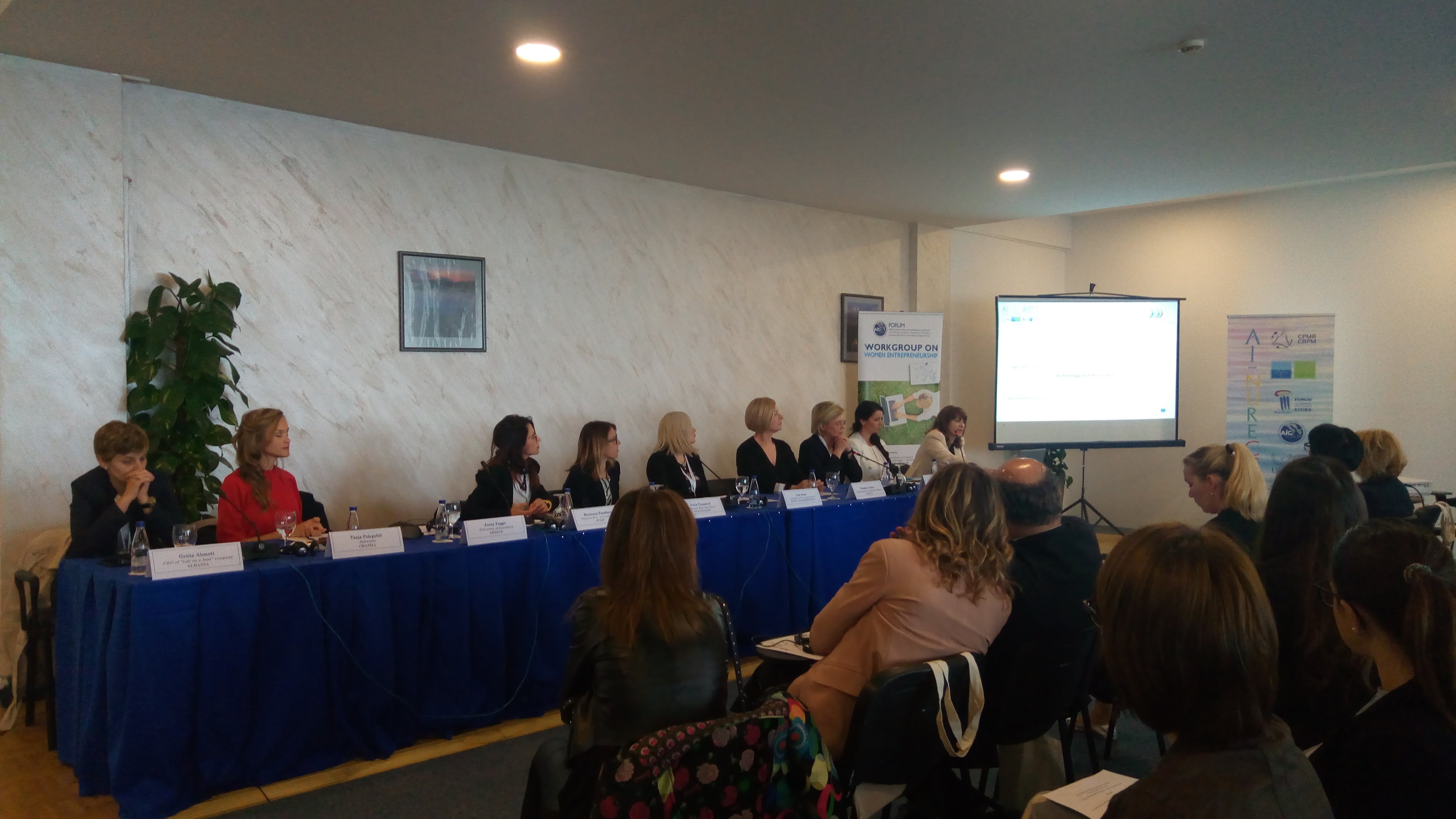 A last mention goes to the EU-project Workgroup, which saw the intervention of Lodovico Gherardi, Coordinator of the managing Authority Unit of Interreg ADRION Programme: during his speech, he underlined as the AI-NURECC project is an example of good practice for the implementation of the EUSAIR strategy.

Going back to Forum AIC President words: “Namely, the European Commission has identified our Forum as well as our partners, Cities and Universities as key stakeholders of the EUSAIR Strategy and we are extremely proud of that. In order to make the most of the potentials of our three networks, last year we have decided to bring together more than 120 bodies and institutions in one place, in Split in Croatia. The conference was extremely successful with more than 400 participants, and the representatives of the Danube Chambers of Commerce Association also participated”.

The participation of DCCA delegation was important in building relationships with other macroregions. The result was a Memorandum of Understanding, signed at the end of last year.

“I hope that I have managed to get you more familiar with the Forum of the Adriatic and Ionian Chamber of Commerce, that is at your disposal as a partner for all the initiatives that have the benefit of the Adriatic and Ionian Region in mind. In the end, we can not do without each other, we need each other, and it is up to us to build our own future and assume responsibility. By joint work for the benefit of the whole region, we can achieve what we are dreaming of. We all want to help each other! The region is rich and can provide to everyone, our way of life is free and beautiful but we must not lose the way. We have developed speed, machines give us abundance, and intellect makes us hard, airplanes and the internet have brought us closer together.

However, what we need here is more than our cleverness. We need goodness and humanity, we need it in this region and beyond, we need a world where science and progress will bring the happiness for all of us”, Mrs. Cagalj concluded.

In this wider context, Forum AIC Governing Board and General Assembly meetings took place, with the election of the new President: Mr. Gino Sabatini, President of Marche Chamber of Commerce, has been unanimously elected by the Assembly. After 2 years of Croatian Presidency, held by Mrs. Mirjana Cagalj, President of Split Chamber of Commerce, the leadership comes back to Italy.

Forum AIC Governing Board has also a new Vice President: Mr. Marko ŠantiĆ of the Chamber of the Federation of Bosnia and Herzegovina, until the meeting of the extraordinary Assembly of the Forum to be held in Arta next autumn. Arta was indeed chosen for hosting the 11th Congress of women entrepreneurship in the Adriatic and Ionian Area. On that occasion, an amendment to the Statute, already discussed in the meeting held on 8 May, will be brought to the approval of the Assembly, with the inclusion of two additional vice presidents, as well as the alternation of Presidency and Vice-Presidency founding Chambers of the Forum: the Split Chamber of Economy and the Marche Chamber of Commerce.

After the 2nd Annual Conference of the 3 Fora and the 4th EUSAIR Forum had been held in Budva, from 6 to 8 of May, the Budva Declaration has been adopted on the 8th of May 2019 by the high-level political representatives of the AII/EUSAIR participating countries at the Adriatic Ionian Council / EUSAIR Ministerial meeting. 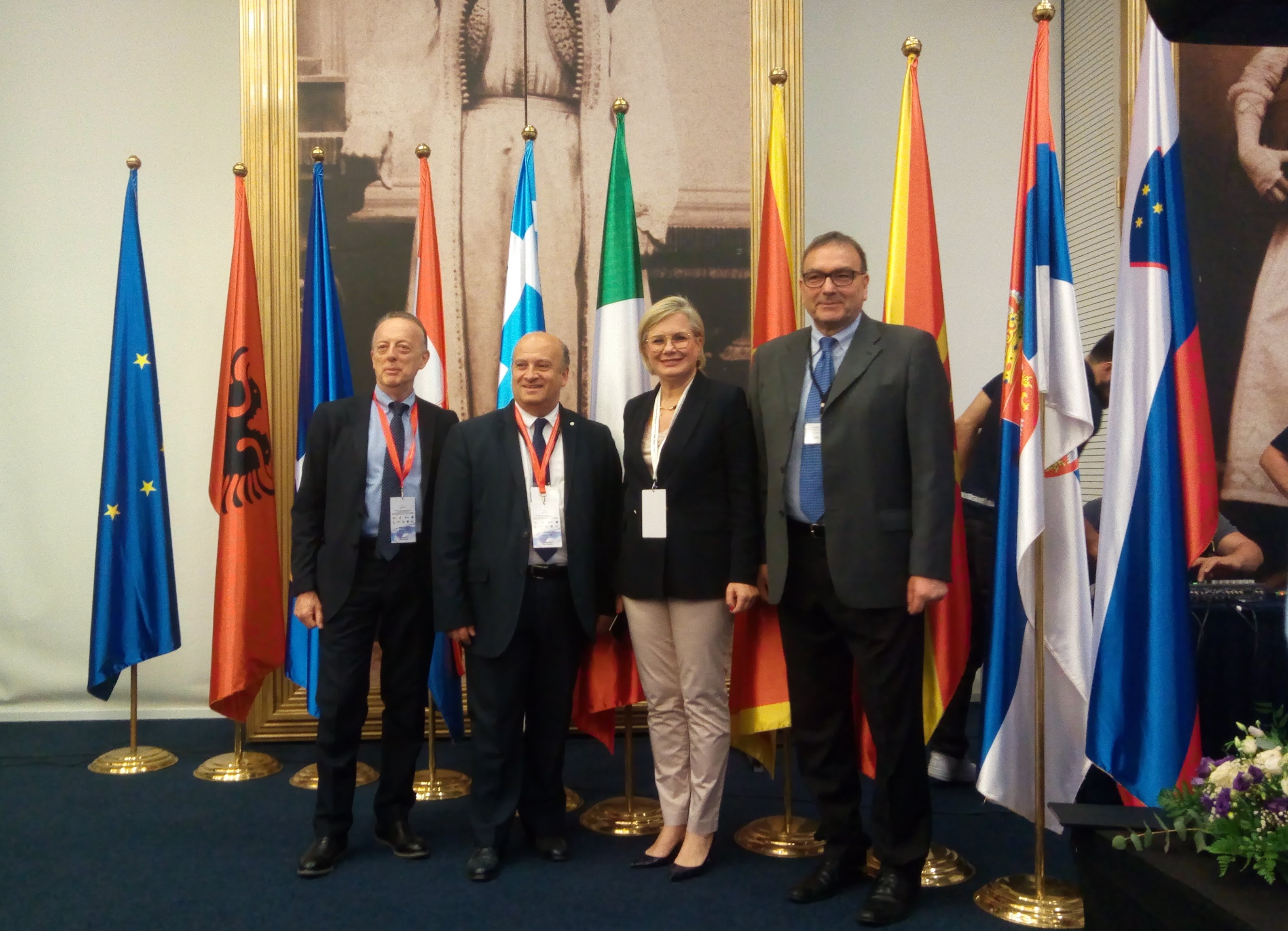 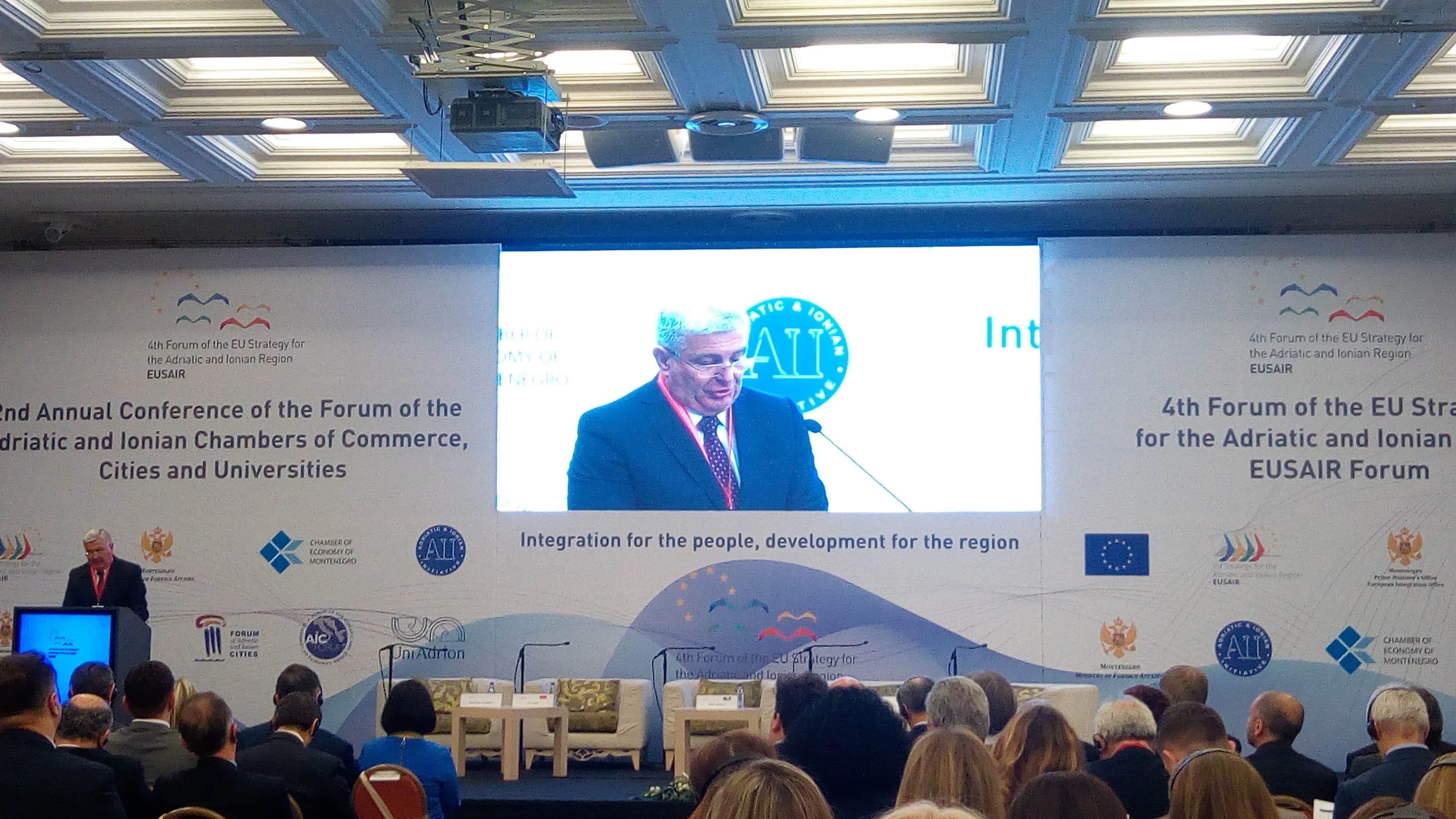 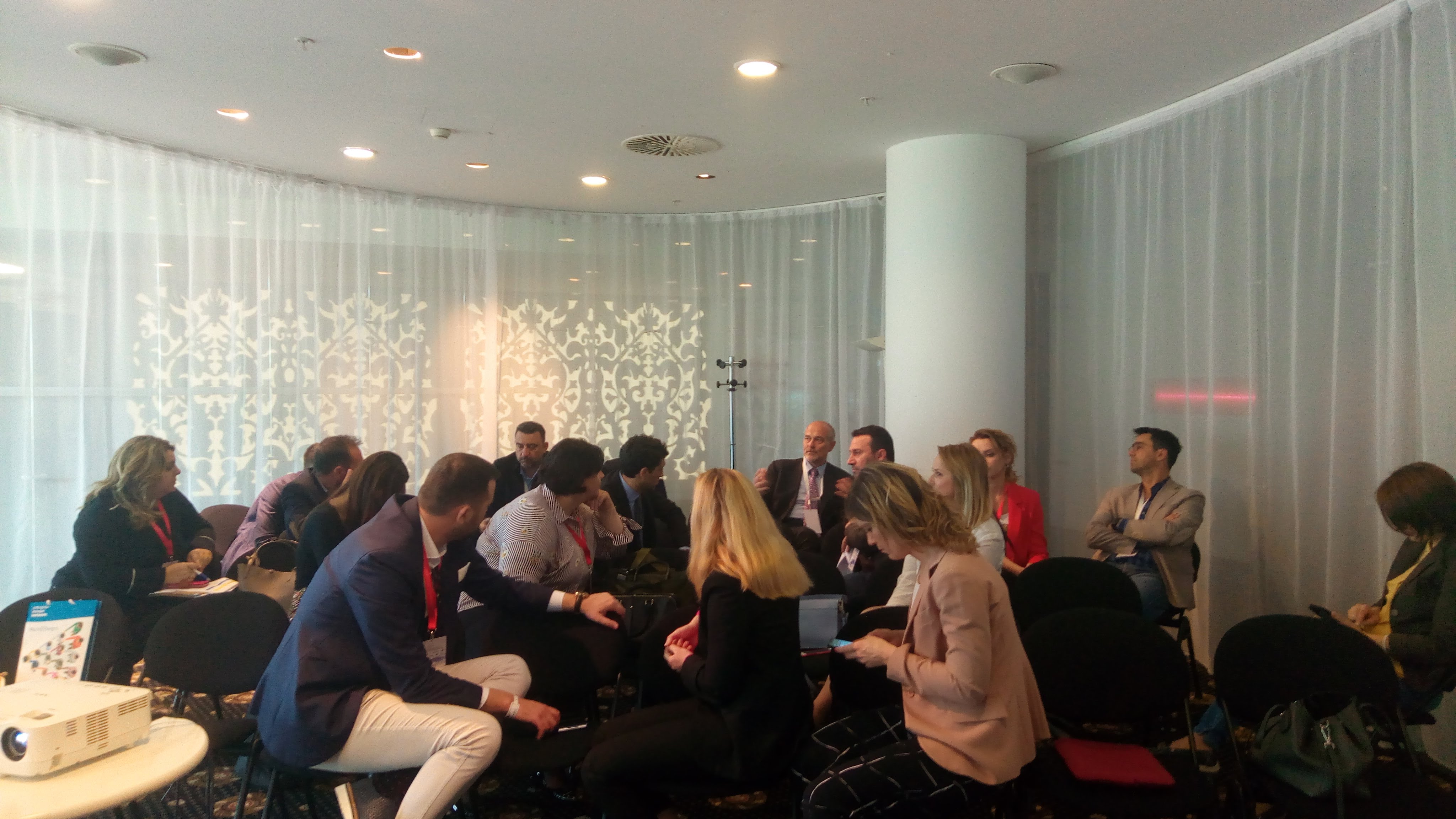