Report_Webinar “Preservation of Natural resources, Innovation and Robotics for the development of the economy in the Adriatic-Ionian Region”, 27/01/2021

Report_Webinar “Preservation of Natural resources, Innovation and Robotics for the development of the economy in the Adriatic-Ionian Region”, 27/01/2021

The primary determinant of all development strategies in Europe is the investment in research and development; in other words, innovations that have application in the economy. On the other hand, global society is entering the phase of a new revolution, at the center of robotics. Robotics will mark all spheres of society. To participate in this market competition, we must recognize this as a priority and insist on putting this in all our strategies and making future efforts in the direction of encouraging innovation through the application of robotics.

The Webinar  “Preservation of Natural resources, Innovation and Robotics for the development of the economy in the Adriatic-Ionian Region”, which was held on January 27 at 14:30, was organized in cooperation with the Croatian Chamber of Economy – Dubrovnik County Chamber, AND aimed at drawing attention within the Adriatic-Ionian Region to the opportunities provided to us through increased investment in innovation and robotics. The exchange of experiences, knowledge, the formation of centers of excellence, technological hubs will undoubtedly generate results over the years. An important role in this matter is preserving the most critical resource (the Sea that binds us together), respect for natural capacities, and the use of robotics to prevent certain unfavorable circumstances in the Adriatic-Ionian Region. 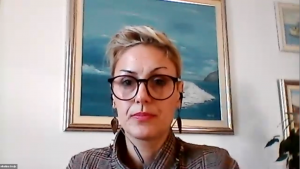 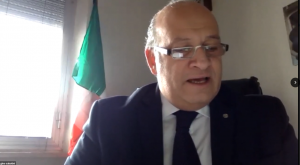 The meeting opened with greetings from the President of the Marche Chamber of Commerce and of the Forum of the Adriatic and Ionian Chambers of Commerce, Gino Sabatini, who greeted all the participants to the second of the three Side-Events organized by the Forum with AII and the Slovenian Presidency.  “These events, organized by the  Forum during this very special period, are in my opinion, a great opportunity to cooperate and to develop important subjects such as the one of today. Robotics is of central interest in our territories, and the EU is very much concentrated on it. All sectors are touched by it, both public and private, and this pandemic will boost and accelerate this new way of approaching life and work. It is always thought that robotics will in some way steal jobs, but I am strongly convinced that it will instead create job opportunities for future generations”. President Sabatini also remembered the important addition to the Forum of Adriatic and Ionian Chambers of commerce: the Chamber of Commerce and industry of Primorska, Slovenia, which will join the Forum force soon. 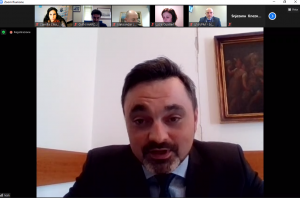 Ivan Barbaric (Vice President for the international and EU Affairs of Croatian Chamber of Economy) remarked that this year is proving itself to be one of the most complex and difficult of all recent times, due the pandemic and also the earthquakes that hit Croatia recently. The Adriatic and Ionian Initiative demonstrated how the economic sector is able to create strong network and beat up the crisis. Institutions have to create the right conditions to innovate and make good use of all the new robotics and technological discoveries. 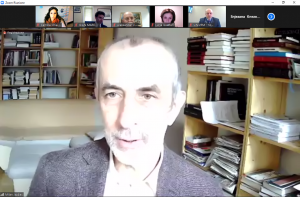 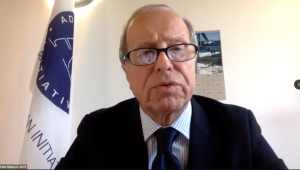 The ambassador Milan Jazbec  (AII Chairman-in-office, Ministry of Foreign Affairs of the Republic of Slovenia) underlined the importance of the subject addressed during the webinar, stressing the fact that we all need to be aware that technological innovation makes our lives better and it makes us move fast forward, also in doing our job as a community network.
The ambassador Fabio Pigliapoco (Adriatic Ionian Initiative Permanent Secretariat) then confirmed what he already said in the morning during the first webinar: that the AII Secretariat is by the Fora’s side, to support their initiatives, since the Fora are in fact the heart and blood of the EUSAIR Strategy and their work is precious. That is why AII is happy to include these events in the framework of the V EUSAIR FORUM. 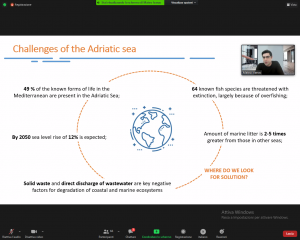 The first part of the Webinar focused on Crisis Cooperation of Science and Economy; The meeting  was opened by Mateo Ivanac (Department of Innovations of Croatian Chamber of Economy) with his exposition: Croatia  Establishment of the Adriatic Sea protection ecosystem with the help of underwater robotics and sensors for conservation and monitoring of sustainability in the Adriatic Sea: INOVAMARE PROJECT, who presented the Project involving Croatia and Italy. The aim of the project is to develop and establish cross-border innovation ecosystem model in area of underwater robotics and sensors for proposes of monitoring and prevent sea pollution with mission oriented on sustainability of the Adriatic Sea. The project wants to raise collaboration of innovation players and give them mechanisms and tools to boost development of new innovative solutions in area of underwater robotics and sensors. 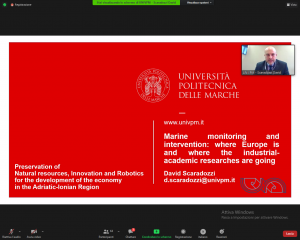 Professor David Scaradozzi (Polytechnic University of Marche, Italy) with his exposition: Marine monitoring and intervention, where Europe is and where the industrial-academic research are going followed what already shown and presented by his predecessor and added a keyword, which he finds essential: synergy. He then offered participants a general overview on the UNIVPM contributions to the marine cause. The European Union pays a lot of attention to the Sea and it is interesting to notice how in the past the Sea was considered to be an obstacle or in any case something that divides; if we stop to consider it more attentively we understand that, since men started navigating, the Sea was the first and unique point of contact. From the European point of view the scope and the dimensions of intervention are multiple, so us at the UNIM are putting together multiple different types of competencies (scientific, economic, technological…). Professor Scaradozzi also reminds the attendees about the UNESCO’s goal number 14, which is specifically devoted to “Life below Water “ 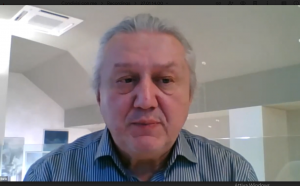 The second session of the webinar was dedicated to Europe and Innovation (as a basis for further development of economic opportunities and economic growth): Dario Marenić (director of ELDA ltd., Croatia) showed a visual presentation of a new product to sanitize hands and described the immediate response of his company to the crisis, which made him reorganize his production priorities. He once again confirmed the idea that it is necessary to teach younger generations how to cope with crisis and most importantly to make them get closer to innovation and technology, in order for them to be of great use for society in the future. 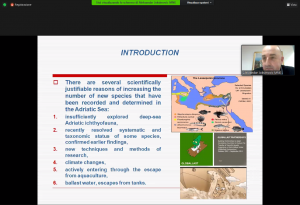 The third session, dedicated to Resource protection in order to maintain the balance between nature, man and economic needs in the future – flora and fauna in the Adriatic through the eyes of science, opened with Aleksandar Joksimović (Institute of Marine Biology of Kotor, Montenegro) who has been paying a lot of attention to the changes that are occurring to the marine ecosystem. In particular, what is very interesting is the presence of a number of new species in the Adriatic sea; this can be caused by the significant changes in the weather conditions resulting in a tropicalization of our area. Croatian and Montenegrin have identified 46 new species in the Adriatic. It is now important at a EU level to face the challenge related to the protection of native ecosystems,  by reducing the impact of the spread of alien species. 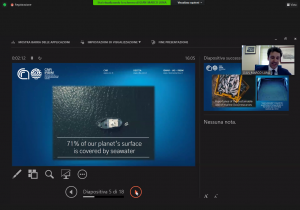 And lastly, Gian Marco Luna (Director of the Italian National Research Council), made a point on the mission of the CNR, which is to promote cooperation, innovation and competitiveness of the national  system. The council is composed by three institutes which implement various competences. Seas and oceans cover 70% of the global surface and are an irreplaceable source of essential goods for human beings, but they are now suffering due to pollution, misuse, exploitation of resources and climate change. We need to cooperate and create a sustainable way of thinking the maritime activities by focusing on innovation and technology. Robotics can give a serious and important contribution to the sector (green boats, new techniques for fishing and cleaning water from human waste, control of climate changes…)

The debate will continue in the group that will be created within the Stakeholder Platform, in which the presentations of the speakers and the recording of the event will be uploaded.

Here you can find the Registration of the entire EVENT and below the presentations of the Speakers: